In Sumba, an island in the East Nusa Tenggara Province of Indonesia, families rely heavily on kerosene for lighting. While the Indonesian government has committed to electrifying the whole country by 2020 (RUEN, 2017), only 62% of the East Nusa Tenggara population has access to electricity, the lowest energy access level in the nation. The island’s geographical character makes tapping into the national grid difficult. PLN, a state-owned company, holds a monopoly on the distribution of electricity in Indonesia. But expanding the electric grid in remote areas is expensive – especially when compared to the cost of deploying off-grid renewable energy systems (IESR, 2019).

Founders of start-up, Renewable Energy Service Company (RESCO) Sumba Terang, saw this challenge and came up with the idea to install solar panels on kiosks – now commonly known as solar-powered kiosks. In Indonesia, kiosks are mostly small neighborhood convenience stalls that sell groceries and hot coffee, locally known as warung (imagine a 13ft x 13ft cafe built from rattan). Kiosks also function as a place for people in the neighborhood to come together, so incorporating charging stations at the new solar-powered kiosks was also important for RESCO Sumba Terang. 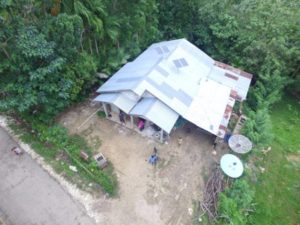 The company’s solar-powered kiosks are now spread over 30 villages in Sumba. The company has also distributed over 2,000 chargeable lanterns to date. “Nothing good can come out of a centralized energy system, especially for the logistics. Renewable energy also builds community resilience. I think it’s going to be funny if at some point when urban communities in Jakarta continue to suffer from electricity disturbance due to a rigid centralized energy system, where off-grid communities can still casually enjoy lighting and entertainment, all thanks to renewable energy,” said Dedy Haning, director of RESCO Sumba Terang. Solar-powered kiosks have greatly improved the lives of villagers in Sumba. The kiosks also offer a place to watch TV, in addition to mobile phone charging outlets.

All these services enable villagers to gain better access to information. “We are so used to using kerosene lanterns. Almost every Wednesday, people flock to my kiosk with their empty plastic bottles for a liter of kerosene which costs Rp 10,000 ($0.6), that’s a week’s supply of kerosene,” said Mama Wilo, an owner of one of the kiosks in Sumba. Mama is a term commonly used to refer to women in Sumba and the surrounding islands). “We are happy now that we only need to spend Rp 4,000 a charge per week,” Mama Wilo continued, explaining that her electricity expenses are now down to about $0.3 per week.

Once the solar-powered lanterns are out of battery (approx. one week), villagers who rent lanterns can come back to the kiosk, pay Rp. 4.000, return the old solar lantern and have it replaced with a fully charged one. Villagers typically spend 10% of their monthly living costs on lighting alone, according to 2018 data released by the Indonesia Central Agency of Statistics. Many residents of Sumba can now enjoy a 6% cost reduction in electricity bills by switching to solar lanterns.

In light of the COVID-19 pandemic, low-cost renewable energy solutions are needed now more than ever. Costs of fossil-based products like kerosene lamps are high in off-grid areas, and with the predicted 15 million job losses in Indonesia, lowering energy costs and creating clean energy jobs could help the economy recover. At the same time, these vulnerable communities are spared from harmful kerosene fumes that damage the lungs.

“We are hopeful that post-COVID-19, there will be many initiatives geared toward sustainable solutions. The pandemic has shown us that global energy demands of oil, gas, coal, even nuclear, are decreasing, only demand for renewables is growing at this time. We are positive that following this pandemic, the government will further support renewable energy startups to succeed in implementing their innovative solutions,” says, Ariana Soemanto, division head for communication and public information at the Indonesian Ministry of Energy and Mineral Resources

RESCO Sumba Terang works to alleviate energy poverty in a variety of ways. They provide renewable energy facilities such as PV installation and micro-hydro plants that are difficult to maintain in remote areas. To date, they have electrified 34 schools and equipped them with solar charging outlets, set up solar-powered kiosks equipped with charging outlets and installed several microgrids in villages in Sumba. They use a lease to own model, so the owners of the kiosks will eventually own the solar installations.

The startup has worked with many different stakeholders to make these projects a reality, including the Indonesian government, village funds, and donors. RESCO Sumba Terang also initiated a crowdfunding campaign to finance demonstration projects. To access larger household appliances (like refrigerators), kiosk owners can pay a monthly fee for the products throughout an agreed period until ownership is transferred to them outright, this is known as a lease-to-own program. This model has proven to work well for local entrepreneurs who are running the kiosks because they don’t have the capital to invest in bigger appliances if they want to diversify the products they sell. When starting out, most kiosks sell basic groceries, pantry products, and anything with a long shelf life.

After the solar micro-grids are installed on the kiosks, RESCO Sumba Terang collects a maintenance fee to ensure they continue to operate effectively. Owners, meanwhile, can focus their efforts on penetrating a larger market and exploring new ways to diversify their revenue stream. “When a member of a village passes away, we rent the lanterns for ceremony purposes. I charge them Rp 50,000 for an event, all in, until the event is finished, or rent them individually for Rp 5,000,” mama Wilo said, explaining the variety of ways she uses the lanterns for her source of income.

The journey doesn’t end there. Since joining our New Energy Nexus program (a global non-profit that supports clean energy entrepreneurs with funds, accelerators, and networks) RESCO Sumba Terang is working to set up even more solar-powered energy kiosks with chargeable lanterns and charging outlets in Sumba. By coordinating with local cooperatives, they can exercise a microfinancing payment model for the lanterns. Microfinancing has the ability to empower kiosk owners, and female entrepreneurs in particular, to grow their businesses. “Closing the gender gap in off-grid communities such as Sumba can be made possible by sharpening their business acumen, and giving them access to a variety of financing schemes,” said Haning. Going forward, RESCO Sumba Terang seeks to electrify areas that are further away from the grid, including areas referred to locally as “Kampung Adat”, which translates as Indigenous Village. These villages are typically home to no more than 20 households living communally on the highlands. Like the island of Sumba, these remote villages could soon have access to clean power too. 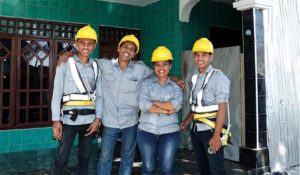